Home » A U.S. Lab on the Brink of Achieving Breakthrough Results

A U.S. Lab on the Brink of Achieving Breakthrough Results

An experiment conducted at the lab establishes some key findings associated with ignition. It suggests that the energy that is released as a ripple effect of fusion is relatively higher than that released by laser. The fact that researchers believe this kind of technological advancement is now becoming increasingly accessible is of significance. By channelling fusion, a process that effectively powers the sun, researchers say that access to limitless clean energy source can be achieved. 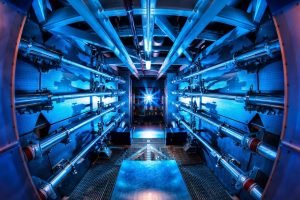 There is a process called inertial confinement fusion which consists of a particular laser energy is gravitated to a peppercorn sized capsule. This process uses 192 beams from the NIF’s laser which considered to be the highest energy example in the world. The capsule these beams are targeted towards contains deuterium, and tritium, two forms of element hydrogen.

The process Results in compression of fuel to 1000 times the density of lead heating the substance to 100 million degrees Celsius. This range of temperature is hotter than that of the centre of Sun. such temperature conditions help initiate thermonuclear fusion.An experiment conducted in early August generated 1.35MJ of energy which is somewhat 70% of the laser energy targeted to the capsule. Ignition state is achieved when the fusion yield is higher than 1.9MJ.