AGC 114905 is located about 76 megaparsecs away in the constellation of Pisces. It is classified as an ultra-diffuse dwarf Galaxy, with the name ‘dwarf referring to its luminosity and not its size. The team’s paper will be published in the Monthly Notices of the Royal Astronomical Society.

AGC 114905 is about the size of our own Milky Way Galaxy but contains a thousand times fewer stars. Dr. Pavel Mancera Piña, an astronomer at the University of Groningen and ASTRON, said that when we discovered six galaxies with little to no dark matter, we were told ‘measure again, you’ll see that there will be dark matter around your Galaxy. 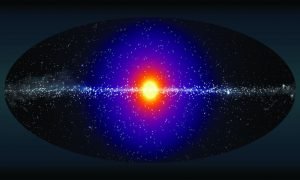 After forty hours of detailed observations, the evidence for a dark matter-free Galaxy only became stronger. The researchers collected data on hydrogen rotation in AGC 114905 between July and October 2020 using the Karl G. Jansky Very Large Array.Subsequently, they made a graph showing the distance of the gas from the center of the on the X-axis and the rotation speed of the gas on the Y-axis. This is a standard way to reveal the presence of dark matter. The graph shows that the motions of the gas in AGC 114905 can be completely explained by just ordinary matter.

In their paper, the authors list the possible explanations for the lack of dark matter one by one. But there are none. And in the most reputed Galaxy formation framework, the so-called cold dark matter model, we would have to introduce extreme parameter values that are far beyond the usual range.