In our solar system, there are about 27,000 near-Earth objects, the majority of which originated in the inner solar system between Mars and Jupiter. However, scientists believe that one near-Earth asteroid did not originate from either planet, but rather is a fragment of our moon. The near-Earth asteroid Kamo’oalewa is a quasi-satellite, meaning it orbits the sun yet goes close to Earth. Its name derives from Hawaiian chants that refer to “an offspring that journeys on its own.” It was discovered in Hawaii in 2016 and is only visible for a few weeks in April.

It’s around the size of a Ferris wheel, with scientists estimating a diameter of 150-190 feet and a distance of 9 million miles from Earth. Although this appears to be a huge size, it can only be discovered using some of the world’s greatest telescopes. When University of Arizona Astronomers studied Kamo’oalewa in southern Arizona, they observed something unique about it: how it reflected light and mirrored lunar rocks from NASA‘s Apollo missions. 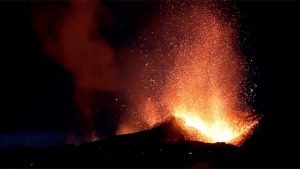 The asteroid was thought to have come from the moon, but Astronomers aren’t sure how something could have broken off of it. Sharkey and Vishnu Reddy, his adviser and an associate professor of lunar and planetary sciences at Arizona, debated whether the asteroid came from the moon for nearly three years.

The crew was able to see Kamo’oalewa this year after missing it in 2020 owing to the COVID-19 pandemic, and the results seemed to suit the bill. On Thursday, their findings were published in Nature Communications Earth and Environment. Another indication that led Sharkey and his team to this conclusion was the fact that Kamo’oalewa’s orbit around the Sun is comparable to Earth’s, but with a higher tilt.