While the most destructive Tsunamis in California originate thousands of miles away, scientists claim to have identified a wave cause far closer to home. A new model shows that earthquakes along strike-slip faults can trigger potentially dangerous waves in some situations — and such faults occur right off the coasts of California.

The results published in the Proceedings of the National Academy of Sciences, if verified, may have an effect on potential local Tsunamis risk assessments along California’s coast and beyond. Tsunamis can be triggered by a number of factors, including landslides, volcanic activity, and earthquakes, which are the most frequent. 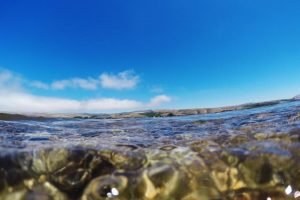 However, not all earth quakes will result in a rogue wave. The main culprit is believed to be quakes around underwater thrust faults, where one side is forced up higher than the other, causing a wave in the water above. Quakes along strike-slip faults, such as the San Andreas, where two plates move past each other, aren’t thought to cause Tsunamis on their own because they only cause horizontal motion.

That’s why geologists were surprised by the 2018 Sulawesi earthquake and Tsunamis in Indonesia. Following a magnitude 7.5 earthquake along a strike-slip fault on Sept. 28, that year, a wave measuring 13 to 23 feet in height hit the provincial capital of Palu. Thousands of people were killed as a result of the two incidents combined.

Scientists who were stunned by the wave’s strength speculated that it could have been triggered by landslides with vertical motion. Ares Rosakis, an engineer who specializes in solid mechanics said, “We didn’t think so. The unzipping of the bottom of the ocean in the Palu area … would be enough to explain the creation of this Tsunamis.”