DC and New York City runs out of Monkeypox Vaccines

In New York City and Washington, D.C., two of the first US locations to offer vaccination against the virus, demand for vaccinations is outpacing supply. 300 appointments for the Monkeypox vaccination were made available on Tuesday and Thursday, according to the D.C. Department of Health, but by noon on Monday, all of those openings had been taken.

The Jynneos vaccination has also been made available in New York City at the Chelsea Sexual Health Clinic, but all of the appointments through Monday were taken. Gay and bisexual males were the only ones who could participate in New York City and Washington, D.C.; they are disproportionately affected by Monkeypox. Additionally, D.C. was providing the vaccination to employees working in facilities where sexual behaviour takes place. 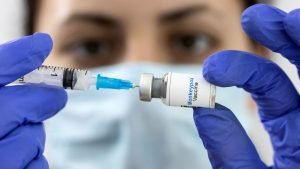 Monkeypox has been reported in at least 48 cases in New York City and 16 cases in Washington, D.C. Health officials said earlier this month that the United States government maintains a stockpile of 72,000 doses of the Jynneos vaccine. The Jynneos vaccination is given in two doses separated by four weeks. After receiving the second dosage, a person is thought to be totally protected. ACAM2000, an earlier smallpox vaccine.

contains around 100 million doses in the United States, but because of its potentially significant side effects, CDC experts said there would be “substantial debate” before it was administered. Health officials in Texas’s capital have reported the first presumptive case of Monkeypox.  Austin Public Health said the individual was in close contact with someone else who was potentially infected with Monkeypox and had recently traveled out of the state.