Google searches for “fake news.” According to Google’s trends info, COVID-19 Vaccination Cards Spiked in New York and around the country after the Centers for Disease Control and Prevention reported that inoculated Americans would abandon masks in most environments. Data show that on May 13, shortly after the CDC relaxed restrictions on masking up inside, more people typed “fake covid card” into the search engine than on any other day this year.

According to Forbes, which was the first to note the alarming trend, the words “fake covid card” and “fake covid vaccine card” increased by 950 percent and 1,150 percent, respectively, on May 13. Following the announcement, the phrase “buy covid Vaccination card” became common in Pennsylvania, New York, and Texas. According to Google Trends results, more searches for the term “fake Vaccination card” occurred in the Empire State on May 14 than on any other day in the previous three months, with the Albany region leading the way. 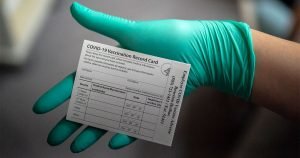 According to news from the time, the black market for fake record cards was already booming in April. A former Long Island CVS employee was recently charged with possessing forged cards that he allegedly stole from his job and intended to distribute to family and friends, says the police. According to Forbes, numerous models and instructions for making and purchasing fake cards have appeared online in recent weeks.

People must now display evidence of Vaccination before being permitted to remove their masks indoors — or even enter at all — at a the number of businesses and events. Vaccination evidence would be needed by dozens of colleges, airlines, and employers. The Centers for Disease Control and Prevention (CDC) declared on May 13 that inoculated Americans should avoid wearing masks and social distancing in most indoor environments, but compliance is mostly left to the honour system and private businesses.