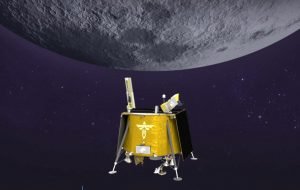 NASA awarded Firefly Aerospace Inc. the CLPS 19D task order in February 2021, and the Blue Ghost program has progressed quickly since then. At Firefly’s one-acre Briggs, Texas lunar landscape site, the team has vital long-lead products on order, manufacturing is underway, and routine vision navigation test flights are conducted. Tom Markusic, Firefly CEO, said, “Firefly is excited to leverage the performance and reliability of Falcon 9 to propel Blue Ghost on the first phase of its journey to the Moon.”

Blue Ghost (named after the unusual Phausis reticulata firefly) can land at Mare Crisium in the Crisium basin of the Moon and run on-board payloads for an entire lunar day (roughly 14 Earth days) and deep into the freezing darkness of lunar night. Early-career and experienced professionals alike are welcome to apply to work on Firefly Aerospace Inc.‘s lunar lander, launch vehicles, and other space-related ventures.