Home » Flu Cases Surges in the US after a Year off Flu Cases Surges in the US after a Year off

The U.S.season has arrived on schedule after taking a year off, with Flu hospitalizations rising and two child deaths. Last year’s season was the lowest on record due to COVID-19 measures school closures, distancing, masks and canceled travel prevented the spread of influenza, or because the coronavirus somehow pushed aside other viruses.Lynnette Brammer, who tracks-like illnesses for CDC said that this is setting itself up to be more of a normal season.The childhood deaths are what we would expect when activity picks up. It’s a sad reminder of how severe the Flu can be.

During last year’s unusually light season, one child died. In contrast, 199 children died from two years ago, and 144 the year before that. The most intense Flu activity was in the nation’s capital, Washington, D.C., and the number of states with high activity rose from three to seven. In CDC figures released Monday, states with high flu activity are New Mexico, Kansas, Indiana, New Jersey, Tennessee, Georgia and North Dakota. 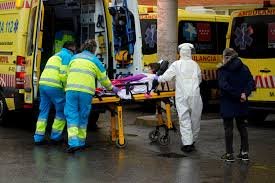 The type of virus circulating this year tends to cause the largest amount of severe disease, especially in the elderly and the very young. It looks like what’s circulating is in a slightly different subgroup from what the vaccine targets, but it’s “really too early to know” whether that will blunt the vaccine’s effectiveness.

People can see what the impact of these minor changes” will be, Brammer said. The vaccine is the best way to protect oneself against the Flu. There are early signs that fewer people are getting shots compared with last year. With hospitals already stretched by COVID-19, it’s more important than ever to get a Flu shot and take other precautions.