Edward Johnson III, the man who built Fidelity Investments into the Wall Street and financial behemoth it is today, passed away on Wednesday at the age of 91, according to his family., who was born in Boston during the Great Depression, started working for his father’s firm as a portfolio manager in 1957. In 1972, he was named president of Fidelity, and in 1976, he was named chairman and CEO after his father retired.

Fidelity was founded by Johnson father, but the company expanded from a “small, regional mutual fund company into one of the world’s largest and most diverse financial services firms” under his leadership, according to the corporation. He fueled the tremendous expansion of personal investing over the last four decades with his vision of making investment products and services accessible and inexpensive to everyday Americans. 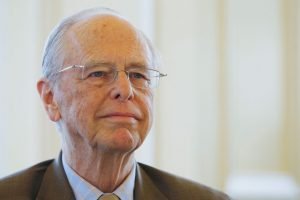 Companies were beginning to move away from pension programmes when Johnson took control in the 1970s. In 1974, the Individual Retirement Account, or IRA, was established. Congress introduced the 401(k) account in 1978, which was an employer-sponsored retirement plan that invested in stocks and bonds but was ultimately managed by the individual employee. Fidelity benefited from a tremendous expansion of investment opportunities that began in the 1980s.

Fidelity began offering mutual funds directly to the general public under Johnson leadership. In addition, the company began offering inexpensive brokerage services, which made stock investing much more affordable. These efforts were rewarded. Fidelity had $3.9 billion in assets under management when Johnson came over in 1977. Fidelity had $5.7 trillion in assets under management when he retired as chairman in 2014.