GameStop announced on Monday that Chief Executive Officer George Sherman would resign, as it swings from a brick-and-mortar video game retailer to an e-commerce firm. He is stepping down on July 31 or earlier upon the appointment of a successor. Its board is searching to identify chief executive officer candidates.

The development was reported by Reuters last week and is the biggest shakeup at GameStop since Ryan Cohen, the co-founder and former chief executive of online pet food company Chewy, joined the company’s board in January.GameStop is in the process of shifting its business away from the brick-and-mortar retailer model into an e-commerce business. It can compete with large-scale retailers such as Walmart and other technology companies such as Microsoft. 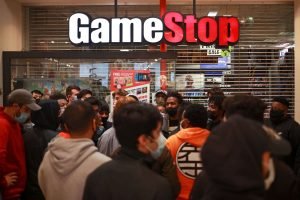 Roaring Kitty on social media posted that the trading frenzy in the company exercised call options on the stock to acquire 50,000 more shares at a strike price of $12. His total investment in GameStop is now worth more than $30 million, giving him a profit of nearly $20 million. Gill has 200,000 shares in the company.He began sharing his positions on Reddit’s popular Wallstreetbets trading forum in September 2019, posting a portfolio screenshot indicating he had invested $53,000 in GameStop.

Sherman sold 76,097 shares of the company on April 15 for $156.44, a regulatory filing showed, delivering proceeds of $11.9 million. Gill attracted an army of day traders who piled into the brick-and-mortar video game stock and call options, pushing the shares up 400% in a single week in January. GameStop is up 720% for the year.The shares ticked slightly higher in after-hours trading with some investors perhaps heartened that Gill exercised his call options to get even longer.