Lessons from the 1918 Spanish Flu Epidemic

Nearly 200 died during that other pandemic, the 1918 so-called Spanish Flu. Zecchinelli and his wife, Karen, own the nearby Wayside Restaurant now. It’s become a Vermont institution. “Effie Ballou opened the Wayside in July of 1918, and two months later the pandemic hits Barre.

Zecchinelli has never stopped thinking about how little he knew about the 1918 flu – and the fact that the grandfather he never met was one of its victims. He died at 35 on October 10 of that terrible year. Germinio Zecchinelli, like so many other Italian stone cutters, had moved to Barre to quarry granite, to carve the nation’s gravestones (and often each others’, as it turned out). 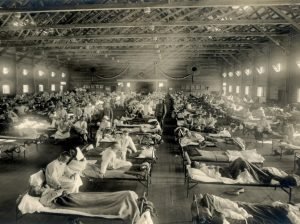 Zecchinelli told correspondent Martha Teichner that the Spanish Flu is often referred to as the forgotten flu. If we had anything to do with it, it wasn’t going to be forgotten, Germinio and all the others. We wanted to do something to memorialize him and the 50 million others worldwide that died. Because, to his astonishment, there was no substantial monument – anywhere – despite the staggering number of dead. The forgotten pandemic, indeed.

So, in 2018, a century after the fact, Zecchinelli commissioned this one. It is unbelievable that nothing else had been done. Six hundred seventy-five thousand Americans died in that pandemic. We’re at nearly a million and counting dead from COVID.