A previously unknown species of dinosaur, Llukalkan Aliocranianus, have been identified by Paleontologists in Argentina. These used to have huge claws, powerful bite, and a keen sense of hearing to hunt prey 80 million years ago. The fossilized remains of the species include a superbly preserved and uncrushed braincase.

Llukalkan means “the one who causes fear” in the indigenous Mapuche language, and aliocranianus is Latin for “unusual skull.” The creature is part of the abelisaurids family of dinosaurs. It would have resembled a Tyrannosaurus Rex in appearance essentially and also might have tiny stubby arms. The dinosaur is an unusually short, deep skull, which often bore chests, bumps, and horns are what set it apart. 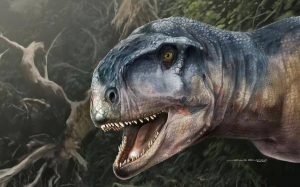 It was at least 5 meters long, which is around the size of an elephant. Llukalkan Aliocranianus would have roamed Patagonia and other areas of the prehistoric southern subcontinent of Gondwana. It included India, Antarctica, South America, Africa, and South America. The most distinctive feature was a small air-filled sinus in the middle ear zone. According to the research published on Tuesday, it had not been seen in any other abelisaurid found so far. It was published in the Journal of Vertebrate Paleontology.

It is probably possible that it heard differently and probably better than the other abelisaurids. It was more similar to the hearing of modern-day crocodiles. Lead author Federico Gianechini, a paleontologist at the National University of San Luis, Argentina, said, “A peculiarity of this dinosaur is that it has cavities in the ear area that other abelisaurids did not have, which could have given this species different auditory capacities, possibly a greater hearing range. This, together with its keen sense of smell, would have given great capabilities as a predator to this species.”