Scientists revealed a newly discovered marine ichthyosaur species with gnarly teeth found in Colombia. The partial skull of an ichthyosaur, an extinct marine Reptile that looked like a swordfish, was unearthed in Loma Pedro Luis, Villa de Leyva, in Boyacá, Colombia, in the 1970s, according to a study published in the Journal of Systematic Palaeontology.

However, at the time, the specimen was incorrectly labeled as a different species called Platypterygius sachicarum.Dirley Cortés, a doctoral candidate in the Redpath Museum at McGill University in Montreal, reanalyzed the fossil and uncovered it had been wrongly categorized.She said that the meter-long skull dates back 130 million to 115 million years, during the Cretaceous period, according to Cortés. This time frame comes after the global extinction event at the end of the Jurassic period. 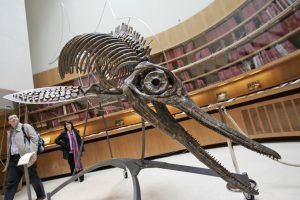 Colombia was an “ancient biodiversity hotspot. The fossils like this freshly identified marine Reptile act as puzzle pieces to understanding the evolution of marine ecosystems. Other ichthyosaurs have small, equally sized teeth perfect for eating small prey. In contrast, the teeth on the skull specimen have “modified its tooth sizes and spacing to build an arsenal of teeth” for catching bigger prey.

The predatory creature had an elongated snout and would have been about 4 to 5 meters long (13.1 to 16.4 feet), she said. The animal could open its jaw around 70 to 75 degrees, Cortés said, making it easier to eat larger animals.