The launch, which took about 10 minutes and 45 seconds, was the fifth in a sequence of space-based infrared system satellites designed to replace the Defense Support Program constellation of surveillance satellites. It was also the 87th launch of the 194-foot-tall Atlas V rocket from Space Launch Complex-41 and the 72nd Atlas V launch. 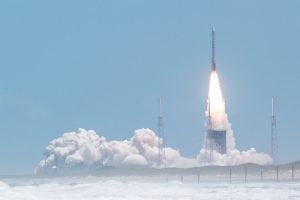 TDO-3 and TDO-4, the spacecraft’s “Technology Demonstration Orbiter” payloads, were successfully deployed and released from the 950,000-pound Centaur upper stage about 16 and a half minutes after liftoff, according to Space News. The satellite separated and deployed to a geosynchronous transfer orbit nearly 43 minutes after takeoff.

A geosynchronous orbit is a high Earth orbit that requires satellites to align with the Earth’s rotation. Lockheed Martin was given a $1.86 billion contract for the upgraded satellite and an agreement for a satellite launch in 2022. Both satellites will be launched into orbit at the height of 22,300 miles. According to Space flight Now, the “SBIRS” GEO 5 satellite’s infrared payloads will be able to detect heat from missile exhaust anywhere on the planet.