Voyager 1, NASA’s farthest spacecraft from Earth, said goodbye to the solar system almost a decade ago, crossing into interstellar space after passing through an unseen door 11 billion miles from Earth. It’s added another 3 billion miles since then, and it’s still sending data back to Earth, enabling scientists to study the gap between stars.

Researchers analysed data beamed back by Voyager 1 Plasma Wave System during its trip, but particularly after it passed through the solar system’s boundary, in a paper published in the journal Nature Astronomy on Monday.The interstellar medium starts where the sun’s impact ends and the interstellar medium begins. The medium is usually defined as flat, barren, and dark, but Voyager 1 PWS has detected a low, steady pattering against its detector, like space raindrops gently falling on a window. Those drops indicate that the spacecraft is constantly accompanied by plasma waves, also known as interstellar gas. 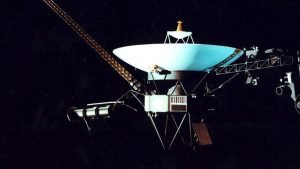 Stella Koch Ocker, a doctoral student at Cornell University, said, “We’re detecting the faint, persistent hum of interstellar gas. It’s very faint and monotone, because it is in a narrow frequency bandwidth.” Voyager 1 could hear the monotone drone for almost a billion miles, and the researchers say these feeble plasma waves are different from other detections produced in the vast nothingness of interstellar space.

For example, the sun may get irritated and erupt, spewing particles into space. The outbursts have a distinct signature that Cornell astronomer James Cordes compares to a lightning bolt. Those bursts were once used to calculate the density of interstellar plasma, but the low, steady hum indicates that Voyager 1 is gathering plenty of data even without the solar outbursts.