Home » NASA Does Not Intend to Share Lunar Samples with China NASA Does Not Intend to Share Lunar Samples with China

As of now, NASA has made it abundantly clear that it does not plan on trading any of its Apollo-era lunar samples with China. The exchange was earlier hoped to happen for China’s Chang’e-5 mission by the agency’s chief scientist. During the Lunar Exploration Analysis Group annual meeting on August 31, Jim Green commented on the situation, further affirming that there will be no exchange. He said that the restrictions deployed by the U.S. law on bilateral cooperation prohibit any exchange of lunar samples between NASA and Chinese organizations.

At least as of now, U.S. has no plans on implementing or creating a bilateral arrangement with China associated with lunar sample trading, said Green. He also shed light on the Wolf Amendment, which was deployed nearly a decade ago as a part of the annual appropriation bills. It certainly put a lot of restrictions on any form of bilateral cooperation. 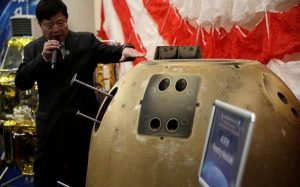 China’s Chang’e-5 was the country’s very first lunar sample return mission that returned with 1.7 kilograms of materials last December. The samples were collected from a region near the volcanic complex Mons Rümker in Oceanus Procellarum considered to possess interesting characteristics.

Scientists find these values samples as the material is relatively young than the previous samples collected during Apollo mission and Soviet-era Luna spacecraft. Green also said that the Wolf Amendment restricts trading and does not outright prohibit it. Hence with time, and focused efforts, research would not be hindered.