Another round of Monkeypox vaccinations were made available in New York City on Tuesday, but the website booking appointments collapsed within minutes owing to the extreme demand, according to health officials. Monkeypox, a virus with symptoms similar to smallpox but less severe, has already been detected in around 267 people in New York.

Since June 23, there have been about 7,000 doses of the Jynneos vaccine distributed in New York City. Later this week, a further 14,500 vaccinations are anticipated to arrive. The health department of New York City tweeted on Tuesday afternoon, “We will notify New Yorkers when more appointments may be arranged. “We apologise for the inconvenience and are striving to create a reliable appointment infrastructure as we roll out more appointments as the availability of vaccines rises in the upcoming weeks. Washington D.C. Health said on Tuesday that locals may pre-register online for the Monkeypox vaccination. 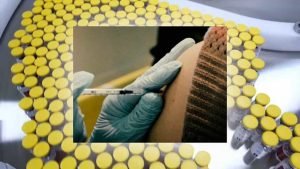 The organisation claims that those who pre-registered will receive an email invitation to schedule an appointment once they become available. For qualified residents of the District, 3,000 appointments will be available on Thursday, July 14. Appointments for vaccinations are free and subject to availability. Pre-registration is advised for residents who do not satisfy the threshold. If eligibility increases, those who have previously registered will be the first to learn about open slots. The virus was initially discovered in Chicago more than a month ago. Health authorities said that 105 people in Chicago have already been diagnosed with the illness.

According to authorities, the instances have largely involved guys who had intercourse with other men. The city has started to provide focused vaccines. According to Massimo Pacilli, the deputy commissioner of disease control for the Chicago Public Health Department, the federal government has already distributed 5,409 doses of the Monkeypox vaccine to the city. Distribution has been aimed towards those who could be more at risk as a result of their sexual behaviour. According to CDC data, 929 instances of Monkeypox have been reported nationwide across many states.