The study found that none of the patients with Omicron required mechanical ventilation.Hospital stays for patients with  were also about three days shorter than their delta counterparts. Unvaccinated patients were also less likely to develop severe disease, according to the data. 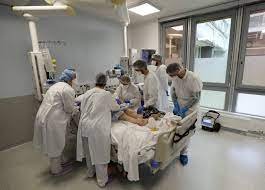 The team of researchers found that the reductions in disease severity associated with Omicron variant infections were evident among both vaccinated and unvaccinated patients, and among those with or without documented prior SARS-CoV-2 infection. Kaiser Permanente Southern California provides care to more than 4.7 million people.The study analyzed more than 52,000 Omicron cases and nearly 17,000 delta cases. The large U.S. study adds to a growing body of data from the United Kingdom and South Africa indicating that the Omicron variant, while more contagious, doesn’t make people as sick as the delta variant.

The U.S. reported a pandemic record of almost 1.5 million new Covid infections on Monday with an average of about 750,000 new daily infections over the last week. That compares with a seven-day average of about 252,000 new cases a day a year ago. Hospitalizations are also higher than last winter’s peak — before the widespread distribution of vaccines — and continue to rise..