As per the trusted sources, the remaining part of the partially collapsed condominium tower in Florida was demolished on Sunday at around 10.30 pm.Before that, the residents in the surrounding areas were told to find a shelter in such places that are closed and then to close all the doors and windows as well as places of potential air intakes in their houses. Daniella Levine Cava, Mayor of Miami-Dade County stated that the shelter-in-place can be lifted after two hours after finishing the demolition of the tower. 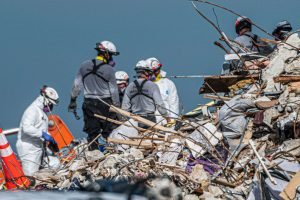 As per the trusted sources, the search and rescue efforts of the buildings were halted on a temporarily basis on the Saturday afternoon for the preparation of the demolished process. It included drilling into the other part of the structures columns. Moreover, on Sunday, Levine Cava stated that the search will begin as soon as the building is demolished and the site is considered as secure and safe.