To paraphrase a scene from the film “Jurassic Park,” Dinosaurs did, in fact, travel in herds. And, according to a recent study, prehistoric animals lived in herds considerably earlier than previously assumed. Researchers from MIT, Argentina, and South Africa detail their discovery of an exceptionally preserved group of early that show signs of complex herd behavior as early as 193 million years ago — 40 million years earlier than otherherding records — in a paper published today (October 21, 2021) in Scientific Reports.

Since 2013, team members have recovered over 100 Dinosaurs eggs and the partial skeletons of 80 juvenile and adult Dinosaurs from a rich fossil bed in southern Patagonia. They discovered preserved embryos within the eggs using X-ray tomography imaging, which they used to confirm that the fossils were all members of Mussaurus patagonicus. This plant-eating lived in the early Jurassic period and is classified as a sauropodomorph, a precursor of the massive, long-necked sauropods that later roamed the Earth. 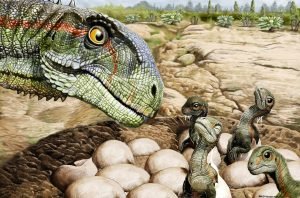 The researchers were surprised to find that the fossils were organized by age:  eggs and hatchlings were found in one area, while juvenile skeletons were located in another. Meanwhile, adult remains were discovered throughout the field side, either alone or in pairs. The researchers feel that this “age segregation” is a significant indicator of a complex, herd-like social structure. The Dinosaurs most likely worked together as a group, depositing their eggs in a communal nesting area.

Adults traveled and foraged for the herd while juveniles huddled in “schools.” Ramezani dated the Dinosaurs herd using old sediments found among the skeletons, determining that it lived roughly 193 million years ago during the early Jurassic period. The team’s findings are the earliest evidence ofsocial herding. Thus, Mussaurus and other sociable sauropodomorphs may have gained an evolutionary advantage by living in herds.