SpaceX and NASA are looking into a parachute issue that occurred on the last two of the organizations’ capsule flights. Officials said during a Friday teleconference that they want to better understand what happening and are looking at photographs and inspecting the parachutes.

Steve Stitch, the manager of NASA’s commercial crew program, said they were taking “extra caution with this very critical system.” SpaceX William Gerstenmaier said that they are not taking anything for granted.One of the four main parachutes was slow to inflate during the return of four astronauts to Earth in November – aboard the 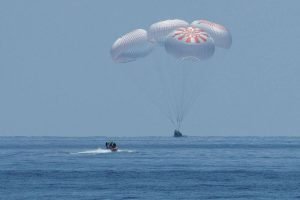 Dragon craft named Endeavour – and the same thing happened last week while a Dragon cargo capsule brought back International Space Station (ISS) science experiments. The parachutes eventually opened and inflated, but with a delay of more than a minute.The capsules safely splashed down off the Florida coast. Only three of four parachutes are necessary for a safe splashdown.

Officials noted that a similar lag also occurred during development and in previous cargo missions – potentially indicating it could just be a feature of the multiple-chute design.Similar parachutes are also used on Boeing’s Starliner crew capsule and NASA’s Orion moon capsule which Stich said sometimes are slow to inflate though neither has launched astronauts yet.  SpaceX first private flight to the ISS is scheduled to launch from NASA’s Kennedy Space Center at the end of March.