The Perseverance Rover of NASA Drills a Hole on Mars Rock

Justin Simon, a planetary scientist at NASA Johnson Space Center in Houston, felt both nervous and excited when the perseverance rover bore into a rock on Mars on Wednesday to gather a sample from Jezero Crater. He has the distinction of directing the effort from millions of kilometres away as the ‘sample shepherd’ but the pressure is on. “These samples will help us understand not only the geology of the crater, but also minerals that are likely related to the crater’s water history,” he stated yesterday.

But first, the rover needed to catch a rock piece in a test-tube-sized container. An earlier attempt in early August had failed. As the drill penetrated into the first rock, dubbed “Roubion,” it just disintegrated to dust, and none of the fragments made it into the container. Simon may finally exhale with relief. Perseverance’s second attempt, using a different rock, appears to have yielded a Martian core around the thickness of a pencil. 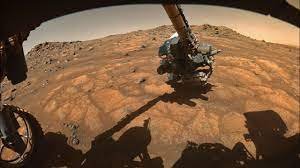 Ken Farley, a Caltech geochemist and project scientist of the Perseverance mission, said, “We got that image of just a spectacular-looking core, a fantastic-looking cylinder, broken off cleanly. It looks geologically very interesting, something scientists of the future will enjoy working on.” However, analysing the new sample will take some time because NASA scientists have been unable to obtain decent shots due to poor lighting conditions, making the images difficult to analyse. To add to the drama for the scientists, one image appeared to show an empty sample tube when Perseverance performed a “percuss-to-ingest” procedure—shaking the sample to ensure the tube wasn’t overfilled, which would cause the system to jam when it was stored.Perseverance’s initial drill attempt, which essentially destroyed the sample, wasn’t a total failure because it gave evidence that the granite had been eroded and worn down by a river flowing into the lake crater billions of years ago.

Because that rock was too powdery to analyse, the scientists moved the rover to a new location and used the Ingenuity copter to scout ahead, looking for a different type of rock to sample.Perseverance trundled slightly to the west, where the researchers discovered a bigger, boulder-like rock on a ridgeline that they dubbed “Rochette” because it seemed less prone to crumble when the rover deployed its tools on it. Perseverance does reconnaissance before each sampling effort by taking a series of photographs of a potential sample rock. It also ran an abrasion test last weekend to check if Rochette was tough enough to sample.